YOUR STATE OF RESIDENCY AFFECTS INCOME AND TRANSFER TAXES:

YOUR STATE OF RESIDENCY AFFECTS INCOME AND TRANSFER TAXES: 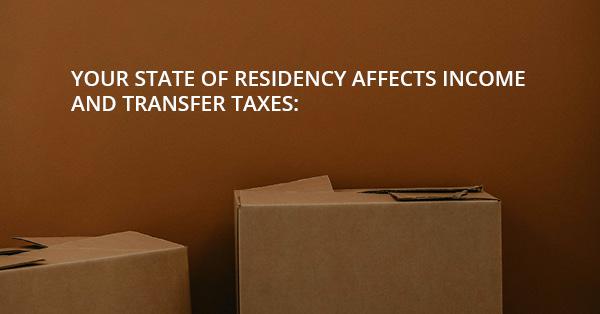 If the move is to be permanent, it is important that a legal domicile be established in the new state. The general understanding is that domicile is the true, fixed, and permanent home and the place to return, even while residing elsewhere. There may be more than one residence but can have only one domicile.

With each state having its own rules relating to residence and domicile, both states may try to impose their income taxes on a client retiree even if they have established domicile in the new state but have not relinquished domicile in the previous state (at least to the state's satisfaction).

State auditors review all of the actions by a taxpayer to determine whether a change in domicile has occurred. The evidence to establish both a change of residence and the required intention to effect a change of domicile must be “clear and convincing”. The following steps, although certainly not all-inclusive or dispositive, tend to establish domicile in a new state:

With the states endeavoring to collect tax dollars, it is important to take the steps necessary to establish the true legal residency, even more so if you move to a state with no state income tax.