MILITARY SPOUSES NOW HAVE CHOICE OF RESIDENCY FOR TAX PURPOSES:

MILITARY SPOUSES NOW HAVE CHOICE OF RESIDENCY FOR TAX PURPOSES:

Submitted by Rachael Potts on 23 January 2023 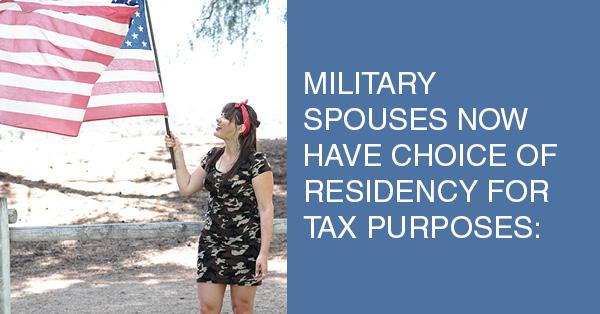 “(A) The residence or domicile of the servicemember.

“(B) The residence or domicile of the spouse.

“(C) The permanent duty station of the servicemember.”.

SEC. 19. PORTABILITY OF PROFESSIONAL LICENSES OF MEMBERS OF THE UNIFORMED SERVICES AND THEIR SPOUSES.

SEC. 705A.PORTABILITY OF PROFESSIONAL LICENSES OF SERVICEMEMBERS AND THEIR SPOUSES.

“(1) provides a copy of such military orders to the licensing authority in the jurisdiction in which the new residency is located;

“(2) remains in good standing with—

“(A) the licensing authority that issued the covered license; and

“(3) submits to the authority of the licensing authority in the new jurisdiction for the purposes of standards of practice, discipline, and fulfillment of any continuing education requirements.

“(1) that is in good standing with the licensing authority that issued such professional license or certificate;

“(2) that the servicemember or spouse of a servicemember has actively used during the two years immediately preceding the relocation described in subsection (a); and