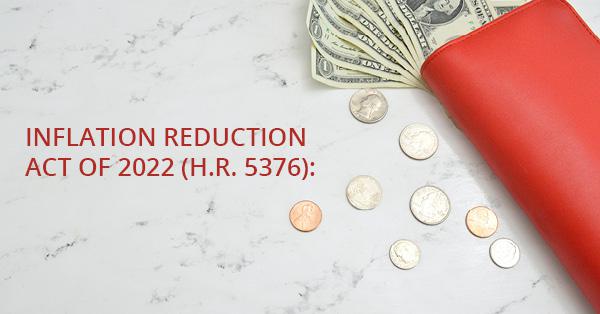 The Senate voted 51-50 to pass a budget reconciliation bill that includes a new corporate book tax, an excise tax on stock buybacks, and $80 billion in new funding for the IRS. The House is scheduled to return on August 9 to consider the bill. It is expected to pass the House and be signed by the President later this week.

The bill includes $80 billion in additional funding for the IRS to improve enforcement, customer service, and operational support. It also drops the 200,000-vehicle cap on sales for an automaker's cars to be eligible for the $7,500 credit, a provision that will be immediately valuable to General Motors and Tesla who had already reached that limit.

The prescription drug pricing reforms aim to help cut costs for seniors enrolled in Medicare. It caps their out-of-pocket costs at $2,000 annually, while allowing the U.S. government to negotiate the price of a small set of medicines beginning in 2026. The landmark proposal is expected to save elderly Americans money and achieve billions in savings for Washington over the next decade. Pharmaceutical giants, which forcefully opposed the bill, also would be required to pay “rebates” to the federal government if they raise Medicare drug prices beyond the rate of inflation.

The bill also includes $64 billion to reduce health insurance premium increases for about 13 million Americans who buy coverage through state and federal exchanges under the Affordable Care Act. These beneficiaries currently receive discounted coverage under a coronavirus-era program which is set to expire this year and would result in premium increases into hundreds of dollars next month.

The biggest tax hike in the plan would apply to all U.S. corporations that earn more than $1 billion per year in profits. Under current law, U.S. corporations are subject to a flat 21 percent tax rate. But dozens of Fortune 500 companies pay no federal income tax at all, by claiming deductions for research and development and other credits.

The Act contains the following sections:

ENERGY AND CLIMATE $385B

Clean electricity grants and loans $30B

Other energy and climate tax credits and spending $235B

Extension of expanded ACA subsidies $65B

Prescription drug and vaccine coverage $35B

Methane and Superfund fees About $15B

Closure of carried interest loophole $15B

Negotiation of certain drug prices $100B

The final bill negotiations left out many key policies— excluding, for instance, plans for new childcare, housing, eldercare, and paid-leave programs. It also leaves in place the $10,000 cap on state and local taxes (which may change with the final version of the bill).