Submitted by Rachael Potts on 19 September 2022 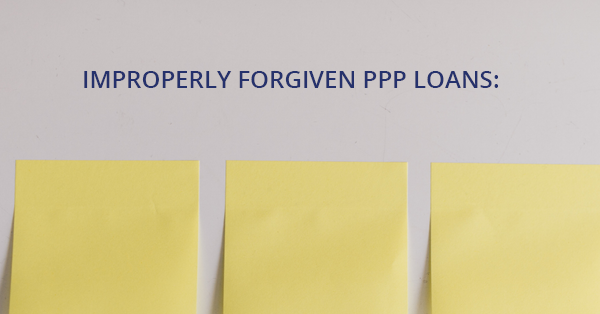 In Chief Counsel Advice 202237010 the IRS indicated that if a taxpayer obtained forgiveness of a paycheck protection program (PPP) loan when they did not actually qualify to receive such forgiveness, the forgiveness would represent taxable income to the taxpayer even though the SBA would have the right to demand repayment of the loan balance.

The advice seeks to answer the following question:

If a taxpayer makes one or more representations that he or she satisfies the conditions for forgiveness of a PPP loan under 15 U.S.C. §§ 636m and 636(a)(37)(J) (“qualifying forgiveness”), but does not factually satisfy the conditions for a qualifying forgiveness , and as a result, has the PPP loan forgiven improperly, may the taxpayer exclude the amount of the forgiven loan from gross income under 15 U.S.C. § 636m(i) or § 276(b)(1) of the COVID-related Tax Relief Act of 2020 (CTRA 2020)?

The memorandum describes the situation that led to this question:

While this is the situation this memorandum addresses, a footnote indicates that the conclusion covers all situations that lead to an improper grant of forgiveness:

A variety of fact patterns may establish that the taxpayer was not eligible for forgiveness under the statute and related regulatory guidance. For example, the taxpayer may have used the funds for personal expenditures. No implication is intended from the facts in the Situation presented below that it limits the reasons why a particular forgiveness is not a qualifying forgiveness.

The analysis notes that although the taxpayer receives cash when the loan is granted, that is not a taxable accession to wealth at that time:

There is no accession to wealth under section 61(a) upon receipt of PPP loan proceeds, as the PPP loan is issued by a bank, includes an interest rate and maturity date, and includes an obligation for the eligible recipient to repay. See Commissioner v. Tufts, 461 U.S. 300, 307 (1983); Commissioner v. Indianapolis Power & Light Co., 493 U.S. 203, 207-8 (1990). Once a participating lender forgives a loan originated under the PPP, however, the recipient of the loan proceeds enjoys an accession to wealth in the amount of the loan that is forgiven. Under general principles of Federal income taxation, the amount forgiven must be included in the loan recipient’s gross income. However, section 636m(i) of the United States Code, Title 15, and § 276(b)(1) of the CTRA 2020 provide express exceptions to the rule that forgiveness of a PPP loan constitutes gross income.

While cancellation of indebtedness is generally an accession to wealth taxable under IRC §61, the memorandum notes a special provision added in the CARES Act provides that this income is not subject to tax so long as it is a qualifying forgiveness:

The IRS position is that if forgiveness is obtained when a taxpayer does not meet the conditions found in the CARES Act and later laws, it is not qualifying forgiveness and thus does not get excluded from income:

Failure to meet these conditions means that there is no qualifying forgiveness, and thus the exclusions would not apply to the forgiven PPP loan. As the Second Circuit concludes in discussing the forgiveness provision of the PPP (15 U.S.C. § 636m) in Springfield Hosp., Inc., 28 F.4th 403, 424 (2nd Cir. 2022):

[F]orgiveness is neither automatic nor guaranteed. A borrower must apply for forgiveness, which will only be granted if specified criteria are met, see 15 U.S.C. § 636m(b)–(d), and the CARES Act places several additional conditions upon obtaining forgiveness [including that the funds are “used for statutorily authorized purposes”].

The IRS then analyzes the situation in question and concludes the forgiveness in this case is not qualifying forgiveness:

The amounts must be included in income since IRC §61’s broad definition of income would require including this in income:

Because section 636m(i) does not apply to forgiveness of her PPP loan, Taxpayer X must include the forgiven amount in her gross income. This result follows from the application of the general principles of Federal income taxation to the amount forgiven in determining the proper tax treatment.

Specifically, the IRS finds that this situation represents a claim of right as the taxpayer had complete dominion and control over the PPP loan proceeds:

Section 61(a) generally provides that “gross income means all income from whatever source derived.” This result applies to all payments that are “undeniable accessions to wealth, clearly realized, and over which the taxpayers have complete dominion” constitute taxable income. Commissioner v. Glenshaw Glass Co., 348 U.S. 426, 431 (1955). In 2020, the year of forgiveness and release from the obligation to repay, Taxpayer X had undeniable accessions to wealth, clearly realized, and over which she had complete dominion under the principles of Glenshaw Glass. Furthermore, notwithstanding the ability of the SBA to pursue repayment in the case of misuse of funds, Taxpayer X retained the PPP loan proceeds in 2020 under a claim of right.

The memorandum continues, applying the claim of right principles to these facts:

The claim of right doctrine derives originally from the Supreme Court decision in North American Oil Consolidated v. Burnet, 286 U.S. 417 (1932). The court there stated that “[i]f a taxpayer receives earnings under a claim of right and without restriction as to its disposition, he has received income which he is required to return, even though it may still be claimed that he is not entitled to retain the money, and even though he may still be adjudged liable to restore its equivalent.” Id. at 424. This doctrine applies regardless of whether the taxpayer acquires the proceeds lawfully; see James v. United States, 366 U.S. 213, 219 (1961) (applying the North American Oil Consolidated approach “[w]hen a taxpayer acquires earnings, lawfully or unlawfully, without the consensual recognition, express or implied, of an obligation to repay and without restriction as to their disposition”).

The fact that the SBA may determine later that repayment is required does not change this result:

The ability of the SBA to pursue repayment of the improperly forgiven PPP loan does not preclude the application of the claim of right doctrine to Taxpayer X in 2020. See United States v. Lewis, 340 U.S. 590 (1951) (taxpayer received a bonus in 1944 and was required to repay the bonus in 1946 after being informed the original payment was erroneous; the court found that the taxpayer held the bonus under a claim of right in 1944 and rejected his argument that he could amend his 1944 return to reflect the subsequent repayment).

Thus, the memorandum comes to the following overall conclusion:

If a taxpayer who does not factually satisfy the conditions for a qualifying forgiveness causes its lender to forgive the PPP loan by inaccurately representing that the taxpayer satisfies them, the taxpayer may not exclude the amount of the forgiven loan from gross income under 15 U.S.C. § 636m(i) or section 276(b)(1) of the CTRA 2020.