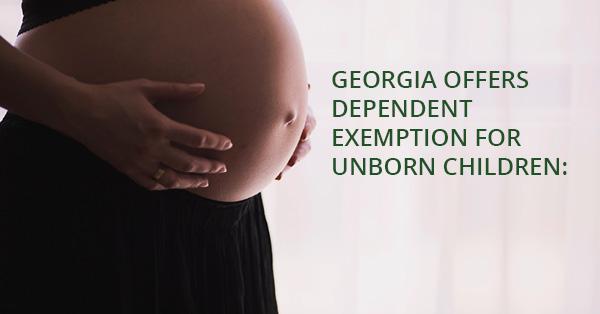 Note from the Editor: Generally, the NSTP focus is on federal tax law. However, every once in a while, something from the states comes across our desk that may have a far-reaching affect. This new guidance issued by the state of Georgia offers one of those moments.

Taxpayers in Georgia can claim a dependent personal exemption for unborn children on their state income tax returns under the state’s “fetal heartbeat law,” the state Department of Revenue said Monday.

The department issued guidance under the Living Infants Fairness and Equality Act (H.B. 481), which specified that “an unborn child with a detectable human heartbeat is a dependent minor for income tax purposes.” The law took effect July 20 after the US Court of Appeals for the Eleventh Circuit vacated a lower court injunction in response to the Supreme Court’s ruling June 24 overturning Roe v. Wade. The department said it was expanding its definition of “dependent” to include an unborn child with a detectable heartbeat, pegged to the date of the appeals court ruling.

“As such, on individual income tax returns filed for Tax Year 2022 where, at any time on or after July 20, 2022, and through December 31, 2022, a taxpayer has an unborn child (or children) with a detectable human heartbeat (which may occur as early as six weeks’ gestation), the taxpayer may claim a dependent personal exemption,” the department said.

The exemption is valued at $3,000 for each unborn child. Taxpayers would have to provide “relevant medical records or other supporting documentation” to claim the exemption “if requested by the Department.” The department plans to issue additional information later this year, including special tax return instructions on claiming the exemption for an unborn child.

Smith cautioned the guidance may have to be rescinded if a lawsuit challenging H.B. 481 is successful. “There is a credible pending state court challenge to H.B. 481,” Smith said. “So it’s still an open question what the status of this law will be next year.”