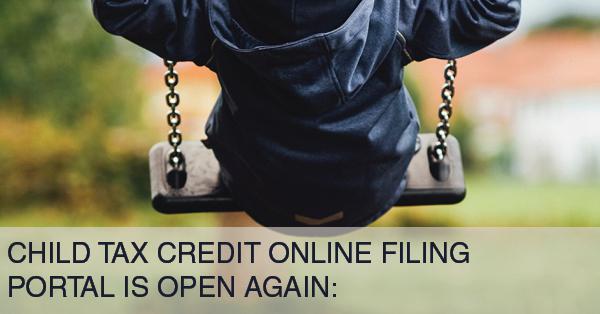 The Child Tax Credit (CTC), already a popular tax break, was enhanced for the 2021 tax year. In addition to being larger — up to $3,600 for each child younger 6 and up to $3,000 for each youngster age 6 through 17 instead up the usual $2,000 per qualifying child — it was available to more families.
Most eligible households got half of their qualifying CTC amount last year as monthly advance payments. They were sent automatically to taxpayers who had filed returns in prior years.
Families who didn't have to file, usually because they earned less than the amount that requires a return had to get their information to the Internal Revenue Service so it could send them the appropriate advance credit amount. They were able to do that via the agency's online CTC update portal.
However, the IRS shut down its CTC portal in March, in part so that the already overloaded tax agency could focus on prior year return backlogs and the 2021 filing season. The similar but separate online tool at ChildTaxCredit.gov also was taken offline.
Now there's good news for those families who relied on the online options to get CTC amounts. The ChildTaxCredit.gov tool is back and they can use it to get the remainder of their tax credit.

Online option returns: All taxpayers who qualify for the expanded CTC could get the rest of their due money by filing a 2021 tax return.
However, Uncle Sam is concerned that many of the nonfilers who used online CTC claim options last year resumed their usual tax season habits. Since they don't have to file a return, they didn't submit a 2021 Form 1040 this year. So they didn't get the rest of the credit.
But they still can. And tax officials are hoping these CTC-eligible families will again go online to do so.
The IRS' original CTC portal that many nonfilers used last year remains offline, but another option at ChildTaxCredit.gov, a special website created by the non-profit Code for America in collaboration with the White House and the Treasury Department, is again operational.

Special CTC filing site: The free GetCTC.org online tool lets eligible individuals file for the Child Tax Credit, either the remaining portion if they got some last year, or all of it if they didn't get advance payments.
Online filers using GetCTC.org also can use the system, which essentially is a simplified tax return, to claim any COVID-19 economic impact payments (EIPs), officially known as the ;Recovery Rebate Credit, for which they qualify but did not automatically receive.
More than 100,000 low-income families have used the GetCTC portal to claim more than $400 million in tax benefits, said David Newville, Code for America's Senior Program Director for Tax Benefits, in a statement announcing resumption of the portal.
Newville added that the organization incorporated prior experiences into the newly-reopened portal to ensure clients have a seamless experience when it comes to claiming the cash that belongs to them. Like most online tax software programs, GetCTC employs an interview-style format that prompts users to answer one question at a time and guides them through the applicable criteria.
The GetCTC tool, however, uses a simplified tax return format that the organization says is more user-friendly than systems that require more, and sometimes complicated, documentation.
It's accessible via desktop or laptop computers, as well as mobile devices. It's available in English and Spanish. It also has information on who is eligible for 2021 CTC.
As for the CTC turnaround, Code for America says eligible families who use its simplified e-filing option could get their payments within weeks of submission.